Airline Gets Cozier With Split-Level Seating

Airline Gets Cozier With Split-Level Seating 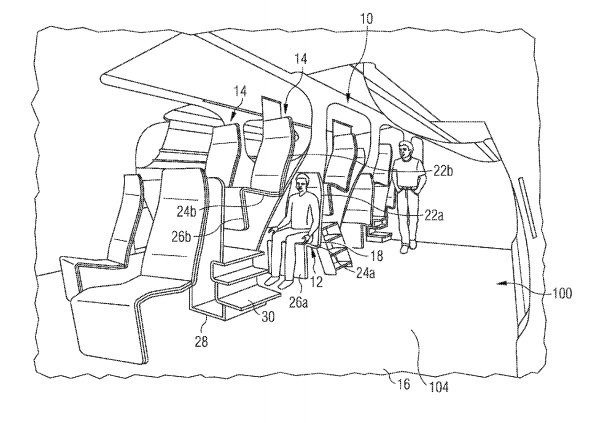 If you think you sit too close to fellow passengers on airplanes now, just imagine what it will be like if Airbus is granted a patent for its split-level passenger seat design. A patent search turns up the “Passenger Seat Arrangement for a Vehicle” patent filing with the United States Patent and Trademark Office (USPTO).

The above drawing from the Airbus patent application published October 1, 2015, by the USPTO shows the passenger seating arrangement comprised of seats arranged on a lower level and additional seats arranged at an elevated level. A supporting surface allows seats on the lower and elevated levels to move between an upright and reclining position.

The elevated seating deck would be accessed from the main cabin by stairs, an ottoman, or a ladder affixed on the side of the lower seats.

Inventors Benedict Kircher, Paul Edwards, and Stephan Sontag say split-level passenger seating makes optimum use of available space in an aircraft’s passenger cabin. From an economic point of view, making efficient use of space is critical to airlines’ bottom-line results.

The seating arrangement is designed for wide-body aircraft that have middle rows of six passenger seats. Replacing this configuration would be a mezzanine seating area, built mostly in the unused upper lobe portion of the aircraft’s fuselage, to maximize seating capacity on these types of planes.

In essence, the Airbus patent would stack air travel passengers in the cabin. The new split-level mezzanine seating design would be used in business class and other premium classes where there are no overhead storage bins in the middle section.

The seats would be arranged in a herringbone pattern so upper level passengers would not be facing the back of the seats in front of them. However, with this pattern, you would essentially have people peering down at any business you may be conducting!

And just when you thought airplanes couldn’t get any more cramped! Airbus claims the seating design would still provide a high level of comfort for passengers and offer plenty of headroom, however, the seating pattern would not be as roomy as business class is now.

Airbus smartly titled its new design invention as a passenger seat arrangement for a vehicle because it can be used in other means of transport, including trains and buses.

However, even if the USPTO grants Airbus the patent, there is no assurance it will be used in airplanes or any other mode of passenger transport.

This bi-level passenger seating configuration is one of many from Airbus. According to a patent search, the global airline manufacturer files about 600 patents a year. Also this year, Airbus filed a patent for a plane design that would reduce boarding time. The new design would allow passengers to board from the middle of an aircraft.

Coincidentally, this isn’t the first patent application related to passenger seating from Airbus. The company previously sought protection for a design where passengers would sit in a bicycle-like arrangement.

Over the years, other airplane manufacturers have filed patents for seating designs. Among the ideas are saddle seats and hexagonal seats where passengers face each other. So far, no airline has gone for these patented ideas.