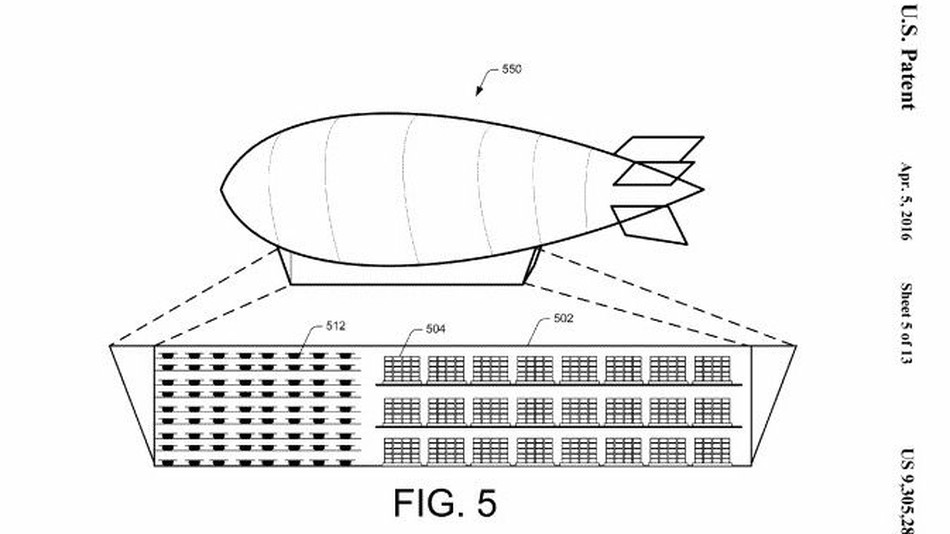 Earlier this month, Amazon celebrated the first successful drone delivery made by its Prime Air service.  But that’s just the beginning of Amazon’s aerial assault into our homes, if a recently unearthed patent filing is to be believed. A possible endgame for the drone delivery agenda: The use of roving “airborne fulfillment centers” (AFCs) to make Prime deliveries.

That’s right. Giant, possibly autonomous motherships full of your favorite ideas that then spit out delivery drones to bring stuff to your front door.

The patent, which was filed back in May of this year for Amazon Technologies Inc., was brought to our attention by Zoe Leavitt of CB Insights.

The patent’s abstract description doesn’t quite paint the AFC as a planet-killer like the Death Star — really, it strikes me as being more akin to a Star Destroyer, if we’re keeping with the Star Wars analogies:

Described is an airborne fulfillment center (“AFC”) and the use of unmanned aerial vehicles (“UAV”) to deliver items from the AFC to users. For example, the AFC may be an airship that remains at a high altitude (e.g., 45,000 feet) and UAVs with ordered items may be deployed from the AFC to deliver ordered items to user designated delivery locations. … Shuttles (smaller airships) may be used to replenish the AFC with inventory, UAVs, supplies, fuel, etc. Likewise, the shuttles may be utilized to transport workers to and from the AFC.

Just imagine all of the UAVs (aka drones) pouring out with deliveries like little TIE fighters.

The AFCs would act as just another distribution center for Amazon — only floating in the sky 45,000 feet above major population areas. As described in the abstract above, it could be autonomous but stocked by human workers or navigated by some combination of AI and human control.

While the patent is filled with potential design sketches and possible implementation plans, it’s vaguely speculative in regard to the actual build of the AFCs. The first comparison that comes to mind from a description, though, might not be a great one: The Hindenburg.

An AFC may be a fulfillment center that is supported by and/or incorporated into an airship. An airship, or dirigible, is a type of aerostat or lighter-than-air aircraft which can navigate through the air under its own power. Airships gain their lift from gas that is less dense than the surrounding air, such as helium or hot air.

Airship transportation famously died with the Hindenburg Disaster in 1937. We’re decades beyond that now — but the comparison still resonates.

Amazon reps have not responded to requests for comment on the patent.

For now, the Amazon AFC patent is just another speculative move in the company’s plan to dominate the commerce world. But as the Prime Air program expands, it’s implementation could come closer and closer to what’s required in the new ecommerce reality. A few years down the road, don’t be too surprised if you look up to a sky filled with giant steampunk-y aircraft spewing out drones, zooming off to deliver toilet paper.