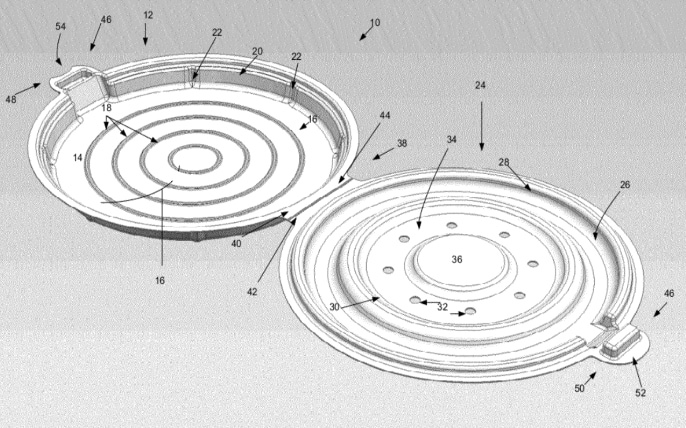 Apple is credited with reinventing the mobile phone, the computer and the music industry. Now it has redefined the pizza box.

The technology giant has invented a space-age pizza box specially for employees at its new headquarters in California. The circular design – naturally finished in white – features carefully-placed holes that allow heat and moisture to escape, preventing the pizza from getting soggy.

The box, whose design has been patented by Apple, was made to allow staff to take pizzas from the 4,000-seater staff canteen back to their desk.

The patent, which was first published in 2012, describes how the box can be easily stacked and features a “plurality of ridges”, “allowing moisture expelled from the food item to be transported away from the food item”.

While the box has been in use for some time at Apple’s “Caffe Mac” canteens, but will come in especially handy at the new “Apple Park” headquarters in Cupertino, where staff have started to move in.

Staff are meant to eat in the enormous main café together in order to encourage employees from different departments to collaborate, meaning a lengthy walk to lunch for some workers around the new headquarters’ spaceship-like “ring” design.

A report on the new headquarters from Wired said that the pizza box was partially designed by Francesco Longoni, Apple’s head of food services.

Unfortunately for takeaway fans around the world, Apple does not appear to have any plans to distribute its invention more widely, leaving the rest of us grappling with low-tech containers and soggy pizza.

True aficionados will be able to experience the box, however. Apple plans to open a café to the public when the headquarters are fully operational.