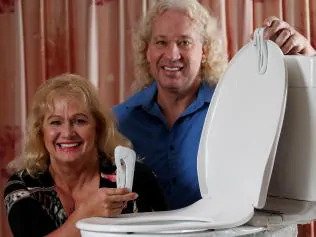 TRINITY Beach couple Kymmie and Michael Corbell may have saved more than 7000 marriages with their simple invention for the household “throne”.

The pair have finally been granted US and Australian patents for their LooMate device, which solves the age-old argument about lowering the toilet seat.

Cairns couple Michael and Kymmie Corbell with their invention to automatically lower the toilet seat and are set to conquer the US after being awarded a US patent for their invention. PICTURE: STEWART McLEAN

The Corbells created the device about six years ago, and have since sold about 7000 LooMates across the globe.

They have also recently welcomed the US’ “father of the infomercial”, Kevin Harrington, on-board as an investor and business mentor.

Harrington, who was one of the original panel members and investors on the TV series Shark Tank, is assisting the couple roll their invention out to broader markets.

LooMate, which is battery operated, uses a sensor to flick the seat down whenever it senses motion when someone reaches for the flush button.