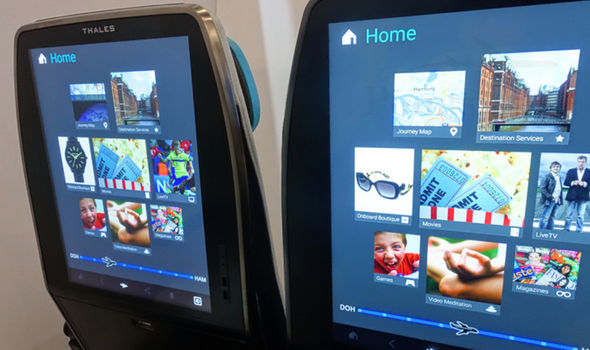 A new type of airline seat could be about to make economy flights more bearable.

French firm Thales has developed an expansive 21.3-inch touchscreen named  Digital Sky that hopes to bring a new level of immersion to your in-flight movies and games.

The enormous display is built to fit into the back of a standard economy seat.

As a result of its portrait orientation, movies only span a small portion of the 21.3-inch touchscreen, since they are laid out horizontally.

However other built-in apps make full use of the massive Digital Sky screen. And the on-screen menu uses the space to list all of the personal entertainment options.

The user interface is designed to expand across the 21.3-inch touchscreen The in-flight entertainment tech was unveiled at the Aircraft Interiors Expo in Hamburg earlier this week.

The working prototype also offers video meditation and destination services to give you a glimpse of your destination before you get there.

Since the seat uses LCD technology – the new economy chairs shouldn’t be too expensive to implement in existing planes.

Live TV, Magazines and Games are all provided via the 21.3-inch touchscreen Thales have yet to announce any launch partners for the touchscreen-centric economy flight.