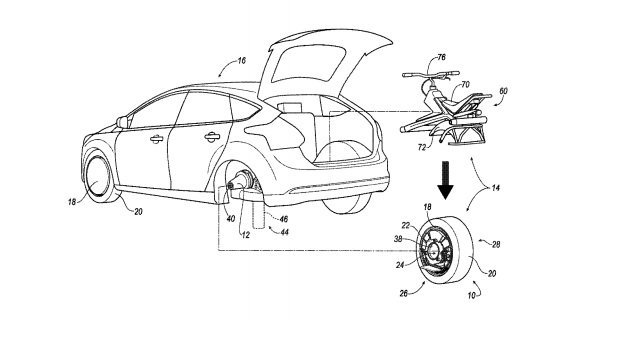 Cars that transform into something else may no longer be a visual effect reserved for the movies. A patent search of the United States Patent and Trademark Office (USPTO) database turned up a patent application from Ford Global Technologies, LLC in Dearborn, Michigan, that would turn your car into an electric unicycle.

Titled, “Self-Propelled Unicycle Engagable With Vehicle,” the invention would be created by removing one of the rear tires of the cars using an automated jack system, as illustrated in the above image from the patent application.

If this sounds familiar to you, you’ve probably seen the movie, “The Dark Knight Rises,” and remember the part where a Batpod detaches from the Batmobile.

This hub, or upper attachment of the unicycle, would include a seat, handlebars for steering, foot rests, sensors, and a battery pack. The hub also would have an engagement feature to engage and disengage the unicycle from the car’s suspension system.

The hub is designed to be self-balancing atop the wheel and would use a gyroscope for navigational orientation.

The idea may be best suited for inner-city travel to maneuver through traffic better. The car would be parked in a park and ride lot or other satellite parking lot on the outskirts of the city during the day while the motorized unicycle is used to more easily and quickly maneuver through inner-city congestion.

The multi-modal transport also serves to address the problem many car owners have with transporting a bicycle in their small vehicles, or the expense of purchasing a bike rack.

The inventors point out that removal of the self-propelled unicycle operates as an anti-theft feature because the vehicle cannot be operated when the unicycle is disengaged from the suspension system.

In the filing for the patent, the inventors note that the multi-modal transportation system can include more than one self-propelled unicycle engaged with the vehicle’s suspension system. Therefore, one or more wheels of the vehicle can be replaced with the unicycle.

The concept would work on any automobile, including a golf cart, as well as front or rear suspension types that are dependent or independent.

Whether this futuristic car invention will be produced for the commercial market has yet to be seen. But Ford thought enough of the innovative idea to protect it with a patent. Despite the manufacturing uncertainty, the patent filing is an indication of the auto maker’s forward-thinking.