Google Glass 2.0 Modified to a Monocle

Google Glass 2.0 Modified to a Monocle 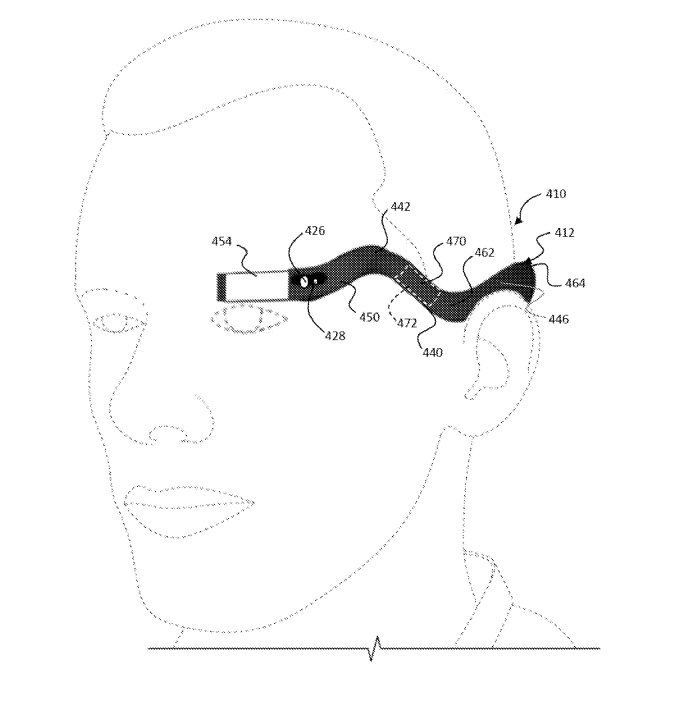 It looks like Google isn’t giving up on Google Glass after all. A US patent search finds that the U.S. Patent and Trademark Office granted the search engine giant a new patent on November 24, 2015, for the next generation of the invention. But this time around, the Google Glass design is a monocle that wraps around the head.

The patent filing, titled “Wearable Device With Input and Output Structures,” describes an electronic device that features a display and an adjustable, bendable band worn on the head of the user, as shown in the above image from the patent application.

The device is configured to fit near the user’s temple and wrap around the ear adjacent to the temple and then along the rear portion of the head. As such, the device would rest on one side of the user’s face.

The band includes image generating capabilities to receive, transmit and display data. The user can view information and images via the display area positioned over one eye.

The original Google Glass made its debut in 2013 and was designed to look like a pair of regular eyeglasses. But in January 2015, the search giant announced it would no longer sell the glasses, noting that it needed to “reset” the device’s development.

In March 2015, there were indications that Google was seeking new avenues of opportunities for its invention, but there had been no official announcements regarding movement in that direction.

The latest patent for the successor to Google Glass is an indication that Google management has decided to give the device another try. The project got the green light in June 2015 under an initiative named Project Aura.

According to the patent filing found in the US patent search, Google Glass 2.0 will have a new interface. Furthermore, the device includes a prism so videos can be viewed through both eyes even though the new device only has one lens.

The patent application’s drawings also show the device including a display, a processor and a memory. The input device located on the band includes enclosed electronic elements. The band also features touch-based input circuitry and a camera.

The wearable computer device will be able to receive, transmit and display data. The patent filing also describes an on-board computing system, a video camera, a sensor and a finger-operated touch pad, either connected by wire or wirelessly to the head-mounted device.

It is not known whether the new monocle device will have hardware or software improvements. The first version of Glass connected to the Internet and could call up content, or film and store images of what the user was seeing.

As with the first version, invasion of privacy issues may arise, a factor many believe contributed to the device’s unpopularity. Many people were uncomfortable around others wearing the device and concerns were raised about the device recording intimate interactions without the knowledge of the parties involved. Many public places even began banning entry to customers wearing Google Glass.

Inventors of the new version, Mitchell Joseph Heinrich and Isabelle Olsson, made the device configurable to accommodate users’ preferences. The company plans to market the wearable electronic device to three different types of customers: traditional, sports and enterprise.

Google hasn’t given any indication when the second version of Google Glass will be made available for sale to the public. But with the growing popularity of wearable tech, it’s likely to be soon.