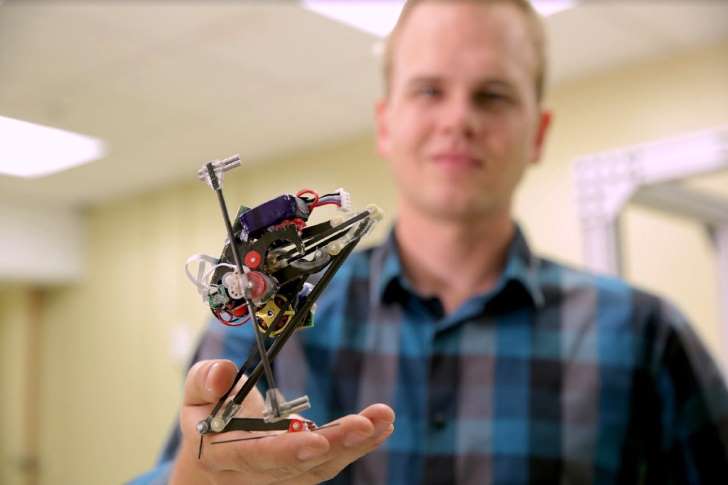 An agile jumping robot that was inspired by some of the animal world’s best leapers could one day help in rescue efforts after earthquakes or building collapses, US scientists said Tuesday.

Known as Salto, the 10-inch (26-centimeter) tall robot can jump higher than a bullfrog and almost as high as a galago, or bush baby, a small primate found in Africa.

The robot can jump one yard (one meter) in less than one second, according to the report in the journal Science Robotics.

That’s better than a human but not the highest of any robot — other machines have been made that can jump more than three meters in a single leap.

Salto does hold the crown in vertical-jumping agility, which researchers define as the ratio of the maximum jump height to the time it takes to complete one jump.

“To have a high vertical-jumping agility, you have to be able to jump high and do it quickly,” explained Duncan Haldane, a researcher at the University of California, Berkeley, and lead author of the study.

According to co-author Justin Yin, “Salto can jump to a height of one meter in 0.58 seconds and be immediately ready to jump again.”

This means Salto can achieve a vertical-jumping agility of 1.75 meters per second, the highest such ratio of any robot to date.

It also attains 78 percent of a galago’s vertical-jumping agility, said the report.

The one-legged robot can jump from the floor, flip forward and then kick off a wall, reaching even greater heights.

“What originally inspired us to do this work was speaking with first responders down at the Federal Emergency Management Agency (FEMA) Urban Search and Rescue Training site in Menlo Park, California, where they have these giant rubble piles simulating collapsed buildings,” Haldane told reporters on a conference call.

“Our goal was to have a search-and-rescue robot small enough to not disturb the rubble further, and to move quickly across the many kinds of rubble produced by collapsed buildings.”

The robot would not be powerful enough to pull a person out of a collapsed building, but might be equipped with sensors that could tip off rescuers to the location of a trapped person.

The single-legged prototype was developed for lab experimentation and is not ready for real-world use.

Battery life is also a problem. The battery takes up 17 percent of the robot’s mass, and allows it to function for only a couple of minutes at a time.

“Depending on the task that you want to accomplish, you’re going to trade off battery life for how high you can jump,” said Haldane.

The study was funded by the US Army Research Laboratory and the National Science Foundation.