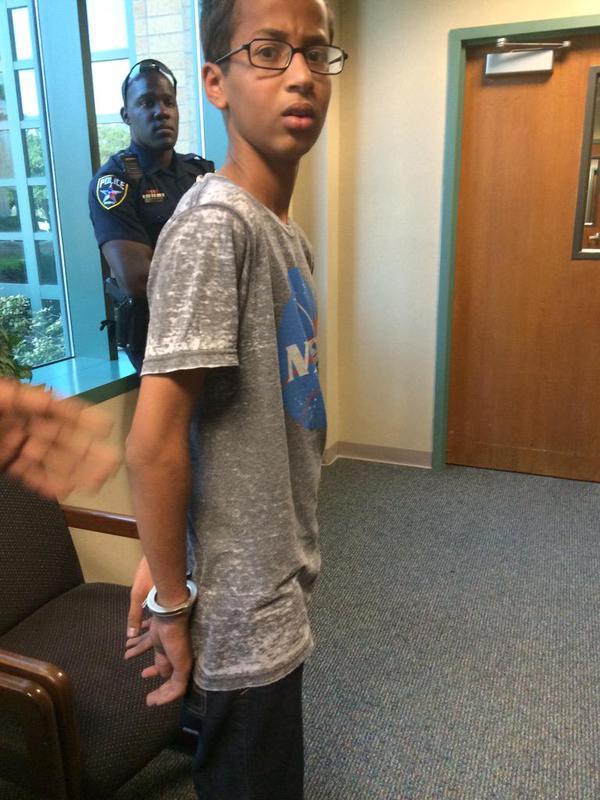 Ahmed Mohamed, a 14 year old teenager with dreams of becoming an inventor, went to his high school in Irving, Texas, Monday, he was so excited to show his teacher the digital clock he’d made from a pencil case.

To his astonishment, the boy’s day ended not with praise, but punishment, after his teacher suspected he was making a “Hoax bomb”, the school administration called the police and he was arrested. A few hours later a photo surfaced showing Ahmed, wearing a NASA t-shirt, looking confused and upset as he’s being led out of school in handcuffs.

“They arrested me and they told me that I committed the crime of a hoax bomb, a fake bomb,” the freshman later explained after authorities released him.

James McLellan, the Irving Police spokesman Officer told the station, “We attempted to question the juvenile about what it was and he would simply only tell us that it was a clock.”

“The teenager did that because, well, it was a clock” he said.

Here’s the photo that the Irving Police Department released for the suspected home-made clock that Ahmed was arrested for.

Shortly after, a huge campaign to support Ahmed was launched on Facebook and Twitter under the hashtag #IStandWithAhmed, with more than 100,000 tweets Tuesday morning, and was still trending globally till the moment of writing these lines.

And today, President Obama showed his support by tweeting from his official personal account, and inviting Ahmed Mohamed to the White House to show him the clock invention that was mistaken for a bomb.

Cool clock, Ahmed. Want to bring it to the White House? We should inspire more kids like you to like science. It’s what makes America great.

Also Facebook CEO Mark Zuckerberg has joined the list of high-profile names showing support by inviting Ahmed to Facebook’s HQ, and saying that the future belongs to people like him.

You’ve probably seen the story about Ahmed, the 14 year old student in Texas who built a clock and was arrested when he…

On Wednesday, police announced that the teen will not be charged.