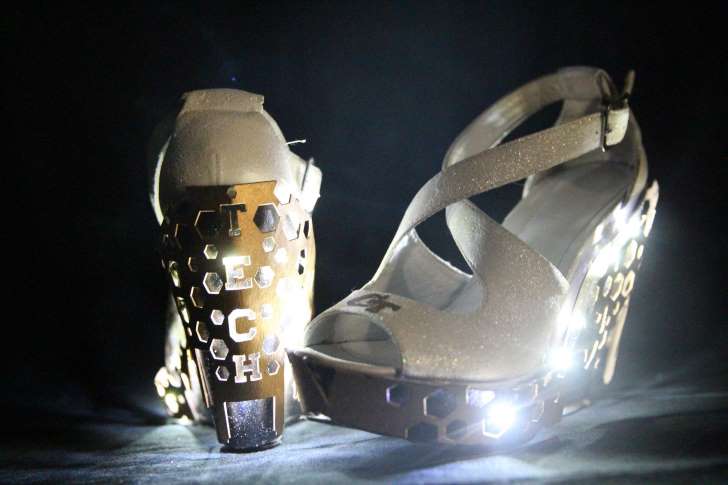 Miss Georgia 2016, Patricia Ford, investigates the electronics in her fancy shoes for the first time.  Miss Georgia hopes to wear a crown on her head at the end of the Miss America pageant Sunday, and she’ll strut toward that goal with high-tech shoes on her feet.

The glittery white wedges light up based on Ford’s movements.

Ryan Beckmann, a Georgia Tech electrical engineering Ph.D. candidate who’s specializing in wearable computing, coded the microcontroller for the shoes. In each of the hollowed-out heels, he placed a tiny compass and accelerometer that communicate with the controller to change the light patterns on the outside of the shoes.

The heels also feature a mini version of the Atlanta skyline, by industrial design student Jordan Thomas, who added mini hexagons that light up like stars. The word “Tech,” for Georgia Tech, embellishes the back of each shoe.

“I’m going to be so proud to have a computer-coded shoe,” Ford says in a video about the invention. “I don’t think any other contestant is gonna have that and so it’s special. It’s unique, and it’s unique to my experience being here at Georgia Tech.”

The word “Tech” for Georgia Tech is on the back of each shoe.

Ford graduated from Georgia Tech in 2015 with a bachelor’s degree in business administration, and loves dancing and Excel spreadsheets.

This isn’t the first time a Miss Georgia has worn high-tech heels made at Georgia Tech to the Show Us Your Shoes Parade in Atlantic City, New Jersey.

Two years ago, Maggie Bridges, then a student at the school, donned 3D-printed shoes featuring a finely detailed laser-cut grille with 3D-printed headlights; a laser-cut pattern on the heels; and little 3D-printed wheels, complete with tread details, along the sides. That marked the first time a Miss America contestant had worn 3D-printed footwear.

The Miss America pageant airs in the US on Sunday at 6 p.m. PT on the ABC network. Here’s hoping at least a few of the contestants wear evening gowns programmed to live-tweet.