Nanosatellites Are About to Take Over the Skies

Nanosatellites Are About to Take Over the Skies 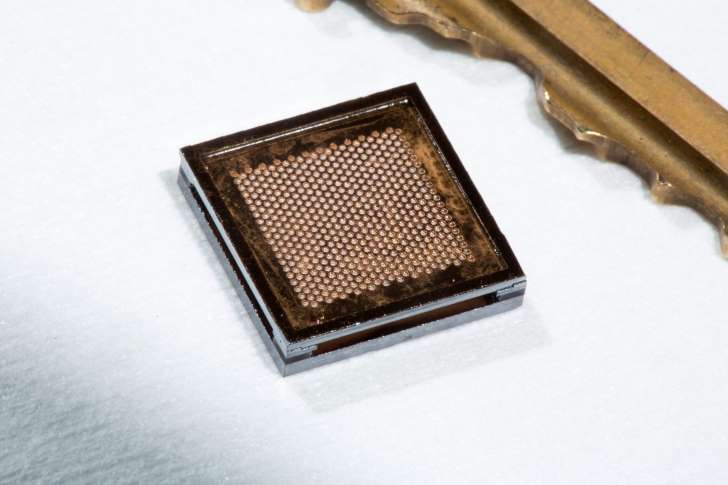 Nanosats—satellites weighing a few pounds or less—are poised to colonize space. Already, hundreds of these cubes (their usual shape) are launched a year, for research, communication and education. But while their electronics can last years, they usually fall out of orbit in a matter of months, thanks to atmospheric drag.

Space propulsion works on the principle that every action has an equal and opposite reaction: If you sit on a wheeled chair and throw something one way, you go the other. Most rockets burn fuel and throw the exhaust out the back, making the rocket go forward. Another option is electric propulsion, which uses electromagnetic fields to accelerate charged particles out the back. But conventional electric thrusters are bulky, and when made very small, they produce a lot of extra heat, rendering them inefficient and likely to corrode. So existing options are not ideal for those hundreds of cubesats we send up into space every year.

A small satellite levitates in a vacuum chamber used to test thruster design in the Space Propulsion Lab at MIT. The thrusters are about the size of a single die cube and contain enough fuel to power the thrusters for a year in space. M. Scott Brauer

Paulo Lozano, an astronautical engineer, and his team at MIT’s Space Propulsion Laboratory have come up with a solution: the ion electrospray propulsion system (iEPS). The propulsion unit looks nothing like a rocket engine. It’s more like a panel. On the thrust side is a charged metal grid, powered by battery. Behind it is a gap, then a membrane, then the fuel, which is a liquid salt that is essentially a soup of ions. The grid generates an electric field, pulling ions toward it, where they fly right through its holes and out the back. A specially shaped membrane makes the iEPS work: It’s composed of a porous nickel insulator, and it’s about the size of a fingernail, with hundreds of sharp points. Picture a tiny circus tent made of cheesecloth. The ions collect at the tips and form little cones, from which they can more easily accelerate through the electric field.

The ions don’t need to be heated like regular rocket fuel, so the whole thruster remains cool to the touch. Rockets using this tech could be made of plastic. The efficiency and small size of an iEPS system means they can keep small satellites orbiting much longer, and even push objects beyond orbit.

Former members of Lozano’s lab have started a company, Accion Systems, with prototype iEPS units being delivered later this month and final products next year. These blinking Rubik’s Cubes could have the potential to change the shape of the space race; Natalya Brikner, CEO of Accion, says the affordability of iEPS “makes space accessible to new industries, emerging markets and developing countries.”