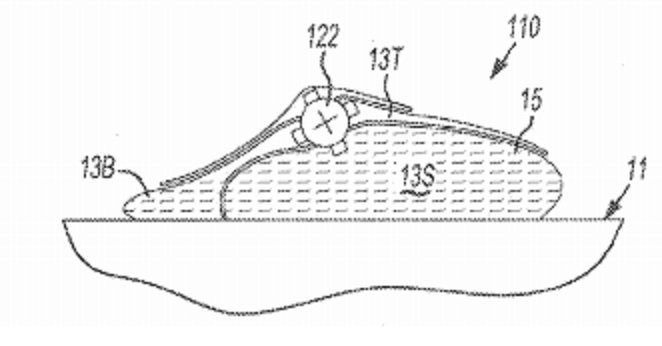 No, the above image isn’t one of those inkblot tests to analyze your interpretation of the figure. Rather, it’s a drawing from a patent application filed by the National Aeronautics and Space Administration (NASA) for an amorphous robot. In other words, a robot that changes shape, or as the patent filing describes it, “a robot lacking a rigidly defined and unchanging shape.”

More than likely, the invention was developed as the next generation of a Mars rover to address the design challenges of previous surface-roving robots. These types of rovers are typically used in search and rescue operations, as well as space exploration missions.

Inventor Arthur T. Bradley describes the amorphous robot as having:

The robot would be controlled via a remote link. And as with other types of rovers, the amorphous robot would contain sensors that allow it to collect samples, measure the conditions around it, take images of the surroundings, and perform a variety of other tasks over a short or extended time period.

Unlike conventional rovers that propel along a surface when deployed, the amorphous rover would change shape depending on the surface type to achieve surface mobility, as well as protection from the elements. This would alleviate problems experienced with traditional rovers, such as getting stuck in terrain, confined areas, or unstable piles of rubble.

Rather than propulsion that moves conventional robots, the new robot invention would feature locomotion. As the valve assembly directs the motion of the fluid within the bladder, the achieved locomotion changes the shape and size of the bladder and moves that part in the desired direction of travel.

With no wheels, tracks, or legs, the movements of the amorphous surface robot resemble that of a worm, gliding across any type of terrain and in any environmental conditions.

The design also allows for other methods of propulsion within the bladder, such as elements within the inner layer. These elements might be electromagnetic spheres, polymer cells, or an elongated flexible tube filled with ferrofluid.

The shape-changing robot is designed to be fully scalable and can be adapted to any type of application or operating environment.

The locomotion of amorphous surface robots patent was published by the United States Patent and Trademark Office (USPTO) on January 5, 2016.

How to File a Patent Patent Application Patents