A new device could make washing machines lighter and greener

A new device could make washing machines lighter and greener 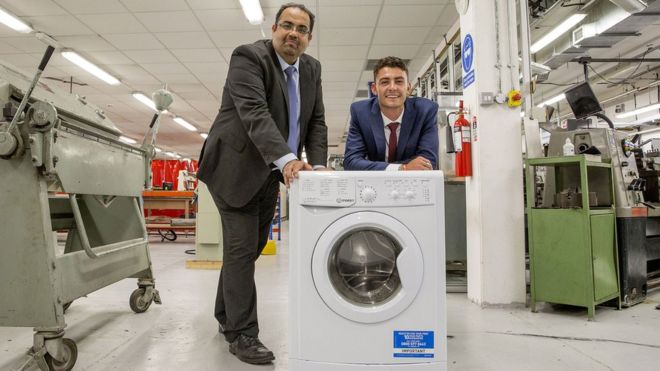 A simple device to cut the weight of washing machines could save fuel, cut carbon emissions, and reduce back injuries, according to researchers.

A typical budget washing machine is weighted by 25kg of concrete to stop it moving while on a spin cycle.

The new invention is a sealable plastic container that is filled with water – but only once the machine is in place.

The team at Nottingham Trent University says the change makes machines easier – and cheaper – to transport.

By replacing the concrete with empty containers, the weight of the machine is cut by a third.

If the change became standard, it would cut the weight of trucks carrying the machines which would in turn cut emissions.

The research suggests that with around 3.5 million washing machines sold annually in the UK, the new device could save around 44,625 tonnes of carbon dioxide emissions a year.

The idea was devised by product design company Tochi Tech Ltd, which works with the university to find innovative solutions to manufacturing common appliances.

It was tested by an undergraduate on a project, Dylan Knight, 22.

He told BBC News: “Everyone thinks the idea must have been thought of before. No one can really believe it. But I promise you it definitely works.”

Mr Knight said the average cheaper washing machine has two concrete blocks – one under the drum at the front and one on top.

For the test, he replaced the one on top with a water-filled container as proof of concept.

As concrete is denser than water, the containers need to be bigger than the blocks, to make up the weight difference.

The firm is in discussions with manufacturers, who will want to ensure there is no downside to this ingenious re-think of a familiar product – and maybe to ask why no-one thought of it before.