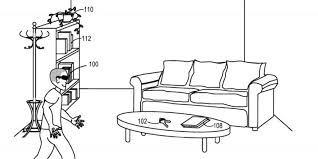 Photo via USPTO (CC-BY) Back in my day, we had keep track of where we left our keys.

The latest patent application from Microsoft shows plans to make HoloLens augmented reality smart glasses the solution to keeping track of your possessions.

The patent filing, published on Thursday, details how Microsoft wants to use HoloLens for object tracking. The headset would map out and monitor the location and movement of real-world objects, like a set of car keys or the TV remote (if those are still a thing).

Here is how Microsoft describes the interaction between its forthcoming mixed-reality headset and the items it could track:

The possibilities of this technology are essentially limitless. The iconic computer company says the feature would let users monitor the location of “car keys, wallets, mobile devices, and the like,” and could even be notified when something needs to be moved, like milk sitting out on the counter next to the fridge.

Object tracking is not a new idea, but current widespread implementation is more frequently found in industrial settings. Retailers like Walmart and Amazon place sensors in the form of passive RFID tags on items to track their location throughout the supply chain.

Ideas like the Tile item tracker use a similar method on a consumer scale. These $25 devices can be hooked to a keychain or thrown in a suitcase. The accompanying app shows users where the tracker is located.

Microsoft’s solution would get rid of the need of purchasing additional hardware for your possessions, something that could quickly add up in price when applied to all of one’s valuables. And chances are HoloLens will not rely on non-user-replaceable or chargeable batteries, like current solutions.

For now, you might still want to download a memory app if you are prone to losing your keys. Microsoft HoloLens has been in ideaion for years, and still does not have a worldwide shipping date. Until it does, here are some mouth-watering concept videos.