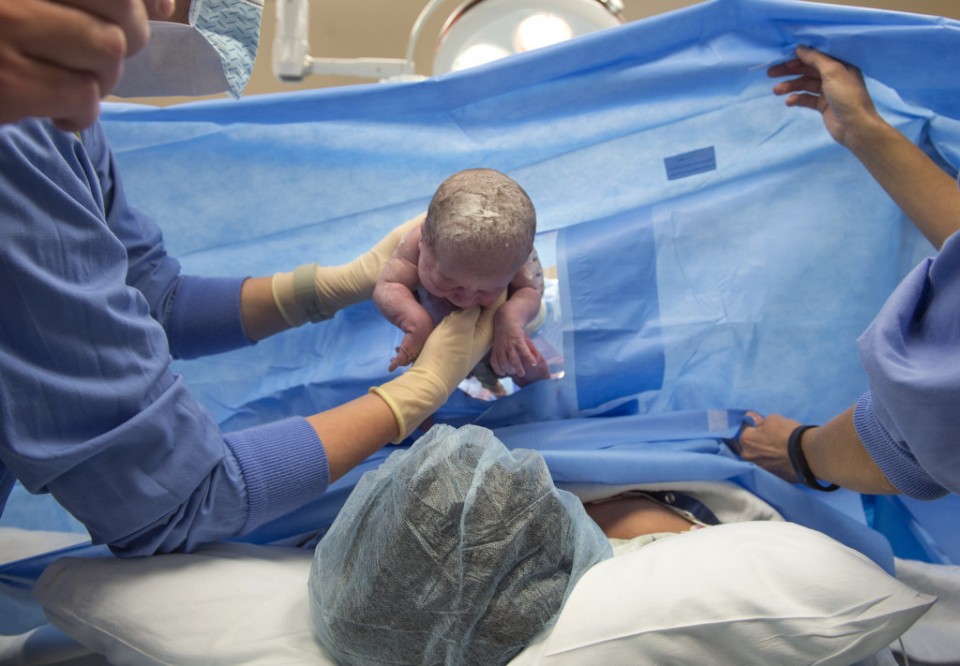 A special new drape used for Cesarean sections has made it possible for a mom and her newborn to bond faster once the baby is delivered.

Spectrum Health Family Birthplace at Butterworth Hospital is the first hospital in Michigan, and one of the few in the nation, to use the drape, called the Clever Medical drape, Spectrum Health Beat reported.

Annie Evans, BSN, RNC-OB and clinical services program manager of women’s health at Spectrum Healh, said the device is the solution to research she had conducted, searching for a way to improve a woman’s C-section experience.

About a half-hour after birth, a baby typically will be ready to breastfeet. But Evans said this process was often interrupted in the C-section process.

“We would take the baby away to be monitored, to make sure he’s breathing, to clean him off,” Evans said. “It was all well-intentioned. But we found we were interrupting a process that was supposed to be happening.”

The drape was designed by three labor-and delivery nurses in Richmond, Va. Similar to the drapes used in a regular C-section, it creates a barrier between the mom and surgical area. But this drape has a doorway with flaps on both sides.

When a baby is born, a nurse or doctor opens the flap that faces the mom’s belly and the other flap creates a sterile landing pad. An 8- by-8-inch hole is revealed and it allows the doctor to pass mom her baby almost immediately after birth.

“It keeps that area sterile,” said Kim Jarrelle, one of the nurses who invented the drape. “And mom doesn’t have to see them sewing her up.”

Evelise Greene of Grand Rapids recently experienced the new creation with the birth of her daughter, Claire. Once the baby was delivered, a nurse wearing sterile gloves took Claire and placed her on Greene’s chest. While Dr. Robyn Hubbard finished the surgery, Claire and Greene were able to bond.

“I thought it was awesome,” Greene said. “I couldn’t ask for more.”

Evans said skin-to-skin contact between a mom and a newborn has many medical benefits. When a baby nestles into their mother’s chest, oxytocin is released in both the mom and baby. This hormone, known for being a “bonding” hormone, intensifies the connection between mother and child.

Greene said she had dreamed about the connection she would have with Claire for the nine months she carried her baby.

Disappointed by the fact a C-section might have delayed the connection between her and Claire, Greene said she was happy she had the chance to snuggle with her baby minutes after birth.

“It was a great surprise,” she said. “It was a blessing I didn’t expect.”