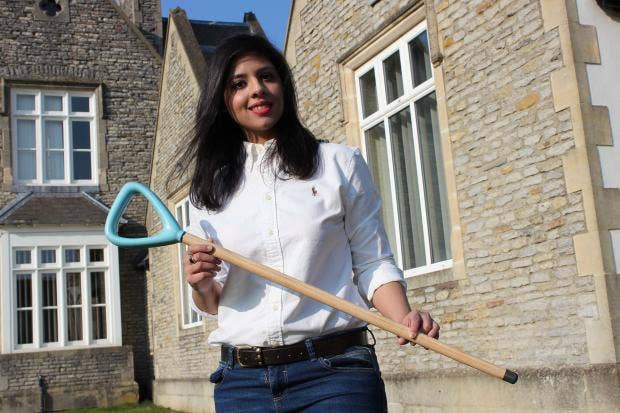 A student entrepreneur whose grandfather was debilitated by Parkinson’s disease has created a mobility aid to improve the lives of other patients with the condition.

Neha Shahid Chaudhry was inspired to invent a “smart” walking stick after witnessing her late grandfather struggle with the disease for seven years, repeatedly suffering falls when his joints seized up.

The device detects when a user’s limbs have frozen and they cannot continue walking. Recognising a pause in motion, the stick vibrates to help the patient regain their rhythm and get moving again.

Idea design technology graduate Neha, of the University of the West of England (UWE Bristol), hopes her invention can benefit half the 127,000 Parkinson’s patients in Britain who regularly experience joint freezing and abnormal gait symptoms.

It has already been successfully tested among dozens of Parkinson’s patients, and the NHS and Parkinson’s UK charity have expressed an interest in her idea.

Neha, 23, founder of start-up company Walk to Beat, has been overwhelmed by the response to the technology.

She said: “When I gave the idea to patients to be tested, there were smiles on their faces and they were saying ‘This could really work’. It seems unbelievable that I have made something which could help people, even if it is to a small extent. It’s a great feeling for me and the patients are happy somebody is thinking of them.

“I wanted to design something that was aesthetically pleasing and discreet, so I could solve a problem in an almost secret way

Neha, founder of Walk to Beat

“There isn’t a cure for Parkinson’s – medication just prolongs the condition and helps you stay alive for longer. My aim is to make their lives a bit better while they are free patent searching with it.”

International student Neha, born in Pakistan, came up with the idea in 2014 as part of an end-of-course project in which she was challenged to devise a idea that could solve a “real world” problem.

Her mobility aid resembles a conventional walking stick, but has sophisticated technology integrated into the plastic handle, including a sensor that can detect when the user has stopped taking steps. Once it has identified a pause, the stick emits a pulsating beat to help the patient resume walking.

Neha said: “People with Parkinson’s get jammed in one place and can’t step forward – it can cause falls. They need any kind of rhythm or sequence to get them started again, because it acts as a reminder. The beat is inside the handle – it senses when you stop and turns off automatically when you start walking again. Patients say it encourages them to walk and they learn to pace with it.”

The mobility aid was designed to look like a conventional walking stick to ensure it did not draw attention to the patient and their condition.

“More than the disease itself, a big problem is the impact on social lives. Some other ideas for people with Parkinson’s have a stigma attached to them – they look like ideas for disabled people. Because one of the symptoms is tremors, patients drink from sippy cups and use children’s cutlery because it is easier to grip, but that seemed undignified to me.

“I wanted to design something that was aesthetically pleasing and discreet, so I could solve a problem in an almost secret way. The beat can only be felt by the user – it cannot be heard or seen.”

Inspiration for the idea was drawn from Neha’s grandfather Zia-U-Din, who passed away two years ago.

Neha, who is now studying for a Masters degree in marketing at UWE Bristol, said: “My granddad had this disease for seven years so I knew a bit about it – that was my starting point. He used to freeze a lot and had a lot of injuries because of falling.

“He used to get really happy when he had good days, when he was able to walk without a stick. But we wouldn’t let him out alone. He once fell in the road and had a major injury.”

Social enterprise Walk to Beat is based in the technology incubator at the Bristol Robotics Laboratory on UWE Bristol’s Frenchay campus, where she received support in developing her walking stick’s sensor and producing a final prototype device from the Robotics Innovation Facility (RIF).

Farid Dailami, an Associate Professor for Knowledge Exchange in Manufacturing based in the RIF, said: “We are delighted to have helped Neha take her idea from a very brief outline to a fully functioning prototype that she has used to show off the feasibility of her original concepts. The Walk to Beat walking stick can make a real difference to the lives of people suffering from Parkinson’s, and we are looking forward to providing further support and helping realise its potential.”

Neha has also received assistance from UWE Enterprise, which helps students and recent graduates set up and run businesses. She was awarded a £15,000 grant from UWE Bristol’s Better Together Fund to take her idea from concept to reality.

Mhairi Threlfall, Enterprise Development Manager at UWE Bristol, said: “Neha’s passion driven by personal experience to tackling problems associated with Parkinson’s is astounding. She has worked tirelessly to produce her idea and develop her business plan. We are supporting her now to look at how this fantastic creation can be commercialised.”