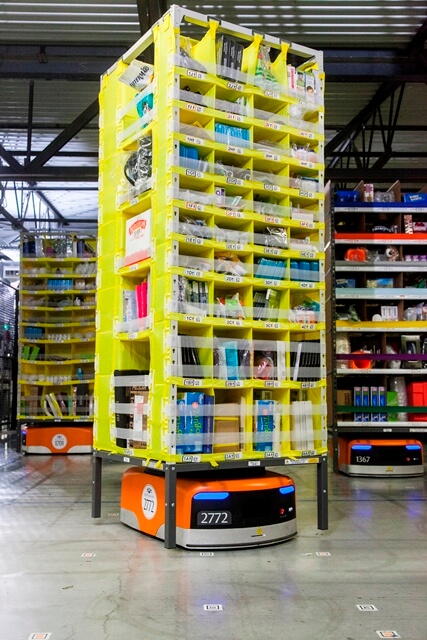 One of Amazon’s hardest working employees could have some stiff competition.

At last count, the e-commerce company was using about 30,000 robots to speed-up the picking and packing processes in its larger fulfillment centers. Now, another Internet giant is gearing up to use a similar technology.

Google was awarded a patent Tuesday for a “robotic warehouse fleet” that could be guided by computer control systems in order to “improve the speed and efficiency of transporting pallets of goods.”

“One possible application includes order fulfillment (e.g., for individual customers), in which cases may be opened and individual items from the cases may be put into packaging within boxes to fulfill individual orders,” according to the patent. “Another possible application includes distribution (e.g., to stores or other warehouses), in which mixed pallets may be constructed containing groups of different types of products to ship to stores.”

A further possible application outlined includes cross-docking, which may involve transporting between shipping containers without storing anything.

The patent also described how it planned to prevent the robotic vehicles from tipping over by limiting forward and angular velocity to avoid excessive torque.

Warehouse robots aren’t the only futuristic concept the two internet behemoths have in common. Both have received approval from the U.S. Federal Aviation Administration (FAA) to test delivery drones, but before they can take to the skies the agency has to first publish its final rules for commercial drone operation.