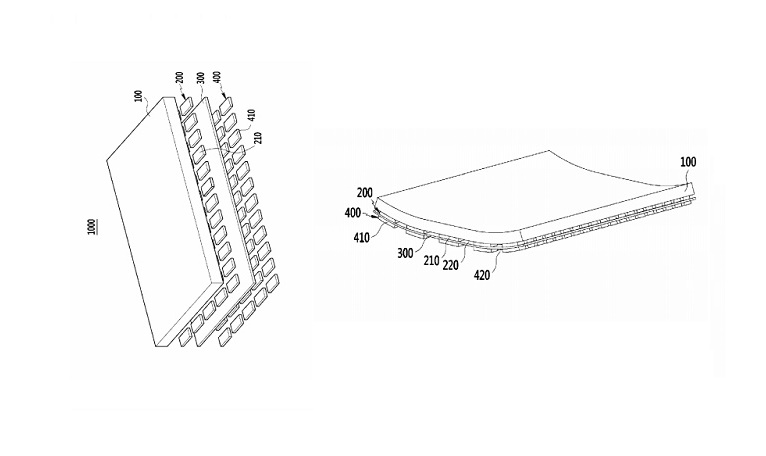 Samsung has secured the approval of the U.S. Patent and Trademark Office for its application to patent a new mobile display technology that is so flexible, you can fold it without breaking. The patent, which is identified as 9,504,145, was submitted in May 2014 but was only approved last Nov. 22.

Unlike the two-panel foldable concept phone that Samsung and Apple have teased in the past, the display technology appears to involve only one panel. The goal is likely more functional rather than an attempt to introduce a device with a radically different form factor.

For example, the company might have developed the technology in order to eliminate any issue such as the bendgate controversy that has plagued the iPhone 6 and 6 Plus devices.

The patent application lists a display structure that is partly constituted by a flexible plastic substrate that can withstand heat and abuse. There are numerous materials cited such as the polyethylene naphthalate, polycarbonate and polyether sulfone, among others. But the idea seems focused on the inclusion of materials that can maintain their structural integrity once bent. This means that the display will also be shatter-proof.

Of particular note is the reference to the so-called dielectric elastomer film. What made this interesting is the fact that Samsung has tagged it as a smart material system. According to the patent, this component converts electric energy into mechanical work. This could indicate that the display is probably able to flex or bend on its own, moving without the application of any external force.

Imagining all the potentials of the technology — especially when used alongside other Samsung patents — the future is certainly exciting for the South Korean company. The bevy of new ideas and the imagination of its designers could provide the world groundbreaking devices that can move on their own, performing tasks independent of human input.

Since it is flexible, the patented display technology can potentially assume a curve or even adjustable curvature to suit the user’s requirements. It could even be implemented as display for a wearable device that adheres to the contour of the wearer’s body. One should note that curve displays have already hit the market as evidenced in the list of devices with curved displays being sold at Amazon.

At this point, however, the bulk of tech watchers cannot identify any specific application wherein the flexible display dictates the structure and form of a potential Samsung device. According to Patently Mobile, a way to address this issue is to evaluate the flexible display within the context of Samsung’s numerous other patents related to the flexible or foldable display technology.

Some claim that a technology based on patent 9,504,145 could possibly debut during the Mobile World Congress next year.