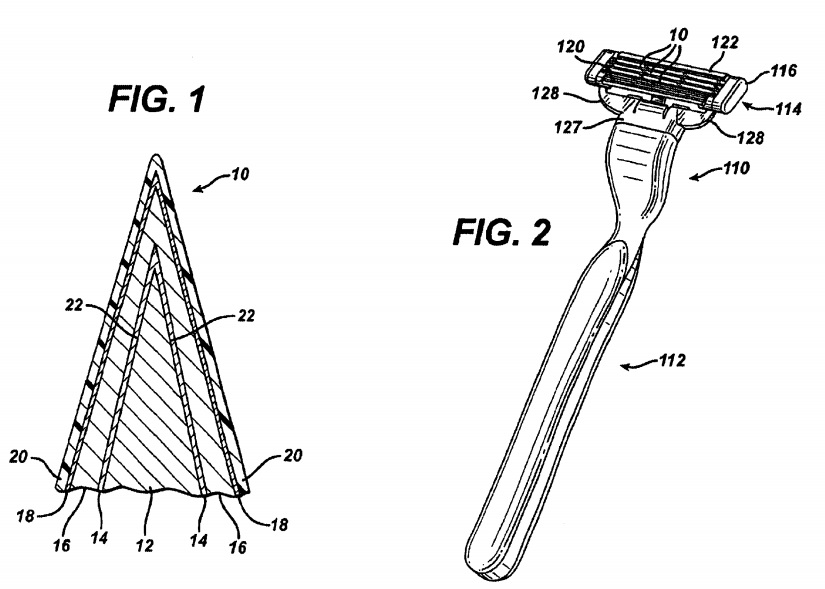 There’s a razor-sharp fight going on in Delaware’s U.S. District Court over men’s razors. Gillette is suing Dollar Shave Club, Inc., for patent infringement on its razor blade technology, as illustrated in the drawings above from the patent filing.

In the civil suit filed this month, Gillette, a unit of Procter & Gamble, is seeking an injunction to immediately stop Dollar Shave Club, an online subscription service that delivers personal grooming products to consumers by mail, from selling products made with the patented technology.

The case is indicative of the importance of knowing how to patent an invention with claims that will stand up in court and how to protect the patent once it is issued. Procter & Gamble protects its patented intellectual property by regularly testing and evaluating competitors’ products. It was during a routine test when the company discovered the claimed patent infringement.

In a press release announcing the filing of the patent infringement lawsuit, Deborah P. Majoras, chief legal officer of P& G, stated: “We have long invested heavily in innovation, and our talented scientists have dedicated their careers to delivering the best shaving experience possible for men and women around the world. Our patents help protect the many technical advancements we’ve made through the years – and when it becomes necessary, we take action to protect these important assets.”

The wedge-shaped blade features an overcoat layer containing the chemical element chromium, which adheres better to the outer layer of the blade made of the compound polytetrafluoroethylene. This results in a hard coating that provides a stronger bond, thus reducing tip rounding and keeping the blade sharp and shielding it from wear.

The patented invention in question is currently used by Gillette on several razor products for men and women, including its Venus, Mach 3, and Fusion razors. Procter & Gamble argues that it owns all the patent’s rights, title, and interest, as well as rights of recovery.

At issue are razor blades being sold by Dollar Shave Club under the names The Executive, The Humble Twin, and The 4X. The blades are made for Dollar Shave Club by Dorco, the U.S. division of a razor manufacturer in South Korea. However, the federal lawsuit does not name Dorco.

The lawsuit, demanding a jury trial, seeks to obtain damages resulting from the “unauthorized manufacture, use, sale, offer to sell and/or importation into the United States for subsequent use or sale of products” that infringe on Patent No. 6,684,513, entitled, “Razor Blade Technology.”

In addition to requesting an immediate stoppage of sales of the products in question, Gillette is seeking monetary damages as a result of Dollar Shave Club’s past infringement of the patent.

Part of the process of how to patent an idea involves defending its usage. As Gillette indicated in its patent lawsuit, unauthorized use of its patent would threaten the value of its intellectual property and the loss of its lawful patent rights to protect the invention from use by others.

Gillette entered the online razor market in 2014 with its Gillette Shave Club subscription service. It has about 20 percent of the online shaving business.

Dollar Shave Club has not issued a comment regarding the patent lawsuit.