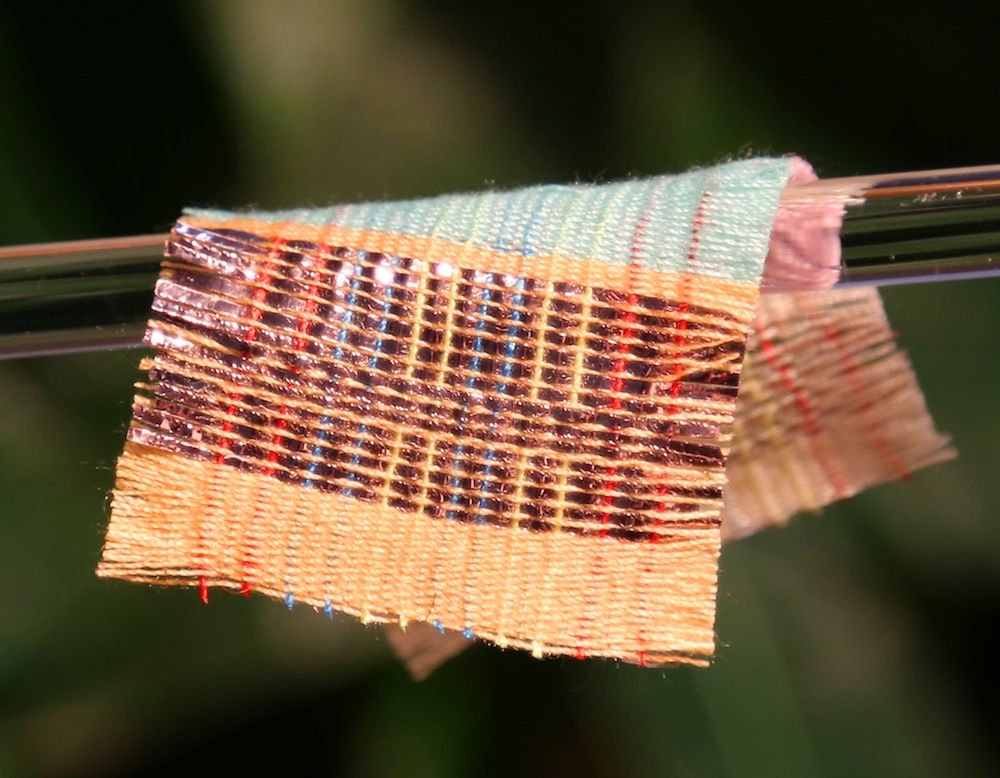 A fabric designed to power wearable devices by harvesting energy from both sunlight and body movements can be produced on a standard industrial weaving machine, according to a new study.

Scientists in China and the United States have demonstrated how a glove-size piece of the “smart textile” could continuously power an electronic watch or charge a mobile phone using ambient sunlight and gentle body movements.

The fabric is based on low-cost, lightweight polymer fibers coated with metals and semiconductors that allow the material to harvest energy. These fibers are then woven together along with wool on high-throughput commercial weaving equipment to create a textile just 0.01 inches (0.32 millimeters) thick.

“It is highly deformable, breathable and adaptive to human surface curves and biomechanical movement,” said Xing Fan, one of the fabric’s inventors and an associate professor of chemical engineering at Chongqing University in China. “And this approach enables the power textile to be easily integrated with other functional fibers or electronic devices to form a flexible, self-powered system.”

In a paper published online Sept. 12 in the journal Nature Energy, the researchers described how they used a layer-by-layer process similar to those employed in the semiconductor industry. Using this method, they coated polymer fibers with various materials to create cable-like solar cells that generate electricity   from sunlight and also  so-called triboelectric nanogenerators (TENG).

If these two materials are then connected by a circuit, a small current will flow to equalize the charges. By continuously repeating the process, an alternating electrical current can be produced to generate power, Fan added.

By tweaking the patterns and configurations of the textile, the researchers found they could tune the power output and customize it for specific applications by aligning the TENGs with the direction of body movements so that they can capture as much energy as possible, or by using different patterns for high-light and low-light environments.

“This is very important. Different applications have different requirements. For example, the voltage requirement of a cellphone is different from that of an electronic watch,” Fan told Live Science. “Also, people walking between buildings in London may have less sunshine than those running on the beach in California.”

The team has yet to conduct long-term durability tests, but after 500 cycles of bending, there was no drop in performance, Fan said. However, the study noted that electrical output of the TENG did gradually drop to 73.5 percent of its original performance when relative humidity was increased from 10 percent to 90 percent.

Still, the fabric’s full performance can be recovered if the device is dried out, Fan said. He added that encapsulating the textile in an inert material using a common heat-wrapping process should counteract the issue.

Juan Hinestroza, an associate professor of fiber science at Cornell University in Ithaca, New York, who was not involved in the research, said combining two sources of electrical power in a single device was impressive. But even more exciting was the researchers’ use of traditional textile techniques to fabricate the device, he said.

“I believe that this is a fantastic proof of concept that could eventually be escalated to other forms of mass production for textile surfaces,” he told Live Science. “This amazing system approach taken by the research team validates my personal belief that everything can be a textile and that everything will eventually become a textile system — from fiber-based airplane structures and space station inflatable modules to wearable power generators such as the one described in this article.”

In addition to wearable devices, the material could be used to create larger energy-generating structures, like curtains or tents, the researchers said. The fabrication process should also allow the energy-generating materials to be combined with other fiber-based functional devices, like sensors, Fan added.

Next, the researchers plan to focus on improving the efficiency, durability and power management of the textile while optimizing the weaving and encapsulation processes to enable industrial-scale production, they said.