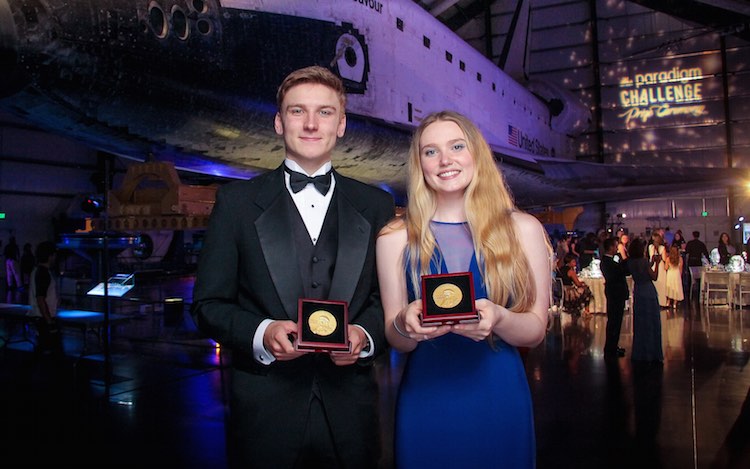 More home fires occur on Thanksgiving than on any other day of the year and 87 percent of those fires are caused by cooking. In the future, families might need to be grateful that these clever students invented the Fire Mitt.

Though many kitchens are equipped with fire extinguishers, often families either don’t know where they’re located or they don’t know how to work them. That’s why Scott Johnson and Emma Spencer designed an oven mitt that can unfold into a fire blanket

The invention became their submission to The Paradigm Challenge: one of the world’s largest youth-based innovation competitions. The competition challenged students to use science, math, or engineering skills, “plus kindness, creativity, and collaboration,” to generate new ideas to prevent injuries and fatalities from home fires, which kill thousands of Americans every year.

The Fire Mitt design includes a pocket to hold a fire blanket that can be unfolded to smother small-to-medium sized fires.

“When a fire breaks out in the kitchen, people need to grab something and put it out in a hurry,” Spencer said in a news release.

Tips about how to put out grease fires and what to do are printed on the outside of the mitt. The idea was recognized as especially ingenious because chefs will know, more consistently, where to find their oven mitt in case of emergency, as opposed to the fire extinguisher.

Judged to be the best idea among those submitted by the 50,000 participating students from around the world, the Arizona State University and Mesa Community College students’ design won them $50,000 in prize money and an all-expense-paid patent application to help implement their idea.

“We are excited about winning the $50,000 so we can pay for college,” said Spencer, “but we are even more excited to have won the patent application because now we can ensure that the Fire Mitt will make it to market and into people’s homes.”

The theme for the next Paradigm Challenge is the reduction of waste in homes, schools, and communities.. The deadline for entries is May 1, 2017.