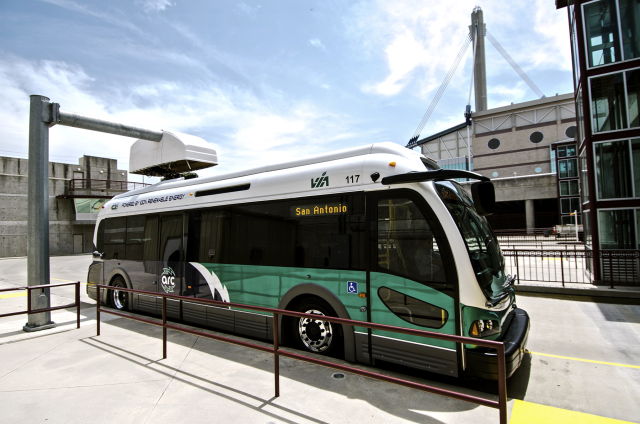 As Tesla and its Supercharger network have demonstrated, it’s a lot easier for people to make the switch to electric vehicles if there’s a robust and rapid charging infrastructure in place. But we have to electrify more than just passenger vehicles if we want to get serious about reducing emissions. EV manufacturer Proterra certainly thinks so, which is why it just opened up the patents for a new fast-charging system it has developed for electric buses.

Not all heavy-duty vehicle applications lend themselves to electric powertrains—think long distance freight trucking, for example. However, buses, garbage trucks, and other vehicles that make frequent stops on urban routes are ripe for battery power, provided they can recharge and get back to work with minimal downtime. Which is where Proterra’s charging system comes in.

Proterra’s high-voltage overhead charging system uses robotic control (and some autonomous software on the bus) to replenish bus batteries in as little as 10 minutes, depending on the size of the battery pack. Charging at 250-1000V (DC) and up to 1400A, the system is eight times faster than the CHAdeMO fast-charging standard and between three and four times faster than Tesla’s Superchargers. And unlike the old-fashioned pantograph, which needs to cover the vehicle’s entire route, Proterra’s system is static. This means bus operators can install them in terminals or at the same locations they use to refill their diesel tanks.

“The interesting thing is these diesel buses have such massive fuel tanks—given how inefficient they are—that it takes longer to completely refill an 80- or 120-gallon diesel bus system than it does to recharge our electric vehicles,” explains Proterra CEO Ryan Popple. “So we’re actually getting to the point where the vehicles that are configured for fast charge can be replenished faster than you can stick a hose in the side of a diesel bus and fill it with fuel.”

According to Popple, Proterra’s fast-charger can recharge a 100kWh electric bus in just ten minutes, sufficient for a circulator bus route of 30 (48km) miles or less. That’s better than diesel or even natural gas, he told us: “We’ve gone from something that would have been considered a negative for EVs—slow overnight charging—and now we’ve gone to the point where EVs are advantaged relative to combustion in terms of speed and ease of refueling.” (Recharging the 400kWh batteries of a longer-range electric bus would obviously take longer.)

As neat as the charging system is, the fact that it won’t be a proprietary walled garden is even neater. Says Popple:

We’re growing very quickly—we have a backlog that extends to the end of next year, we’re tripling shipments in 2017, and yet we still need to work out how to make this industry grow even faster. We discovered that competing electric bus offerings out there lack this kind of fast charging equipment, which for larger fleets is a core tool you need in the kit to do a large-scale EV deployment. So by offering these patents to any other industry participants we think we can get this market to go even faster.

The decision to open up the core patents began with one of Proterra’s early customers asking if it could buy electric buses from another company and still use Proterra’s infrastructure (bus companies don’t like being tied into a single vendor, apparently). “At a Board of Directors level there’s going to be concern if we’re locked into your idea the way an iPhone user is locked into the Apple charging cord,” said Popple. “You can do that kind of thing with smartphones, but you really shouldn’t do it with an industrial market because it tends to slow down the adoption of new technology.”

That first customer was given a transferable license for the charging IP, but rather than repeat that process (which took several months and involved plenty of lawyers) again and again, Proterra decided to bundle the relevant patents together and offer them to anyone under an open license. “It helps heavy-duty urban electrification to move faster, but allows us to stick to our core business,” Popple told us. “For a young technology company, it’s really important we just do one thing well.”