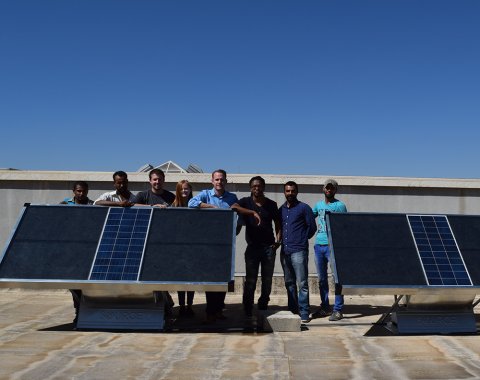 Our atmosphere contains approximately 3,100 cubic miles of water — enough to cover the entire planet in one inch of water.

That water surrounds us in the form of vapor — water’s gaseous, evaporated state. We’re usually only reminded of this on especially humid days, but our air can actually be considered a water source.

Zero Mass Water, a sustainable water startup, is trying to create an easy, off-grid way for anyone to harvest that liquid with its first product.

Each Source unit looks like a solar panel resting on top of a metal box. Company CEO Cody Friesen, a material scientist and engineering professor at Arizona State University, says the device essentially uses sunlight to produce electricity and heat, and which allows a set of proprietary materials to passively catch the humidity in the air.

Friesen won’t say how those materials are engineered or what they’re made of, but explains that they’re designed to have an ideal binding energy for water vapor.

He compares the process to the grains of rice you’ll sometimes find inside salt shakers in humid locations. That rice, he says, is placed there because it binds more strongly to water than the salt does, so the moisture will stick to the rice, and won’t make the salt wet and clumpy.

“You want to make sure that these materials that are going to passively absorb water from the air hold onto that water strongly enough that they’ll do so under dry conditions, but not so strongly that under any condition it takes a lot of energy to get that water back off,” he says.

Friesen says that on average, one Source device can harvest 5 liters of water per day. Because of the device depends on solar power, he says, that number doesn’t vary too drastically between dry and wet climates — solar radiation is stronger in dry places where there are fewer water molecules in the air to absorb it, and water vapor is more prevalent in wet places where solar radiation is less intense.

Once the water vapor is harvested and turned into liquid, the device adds minerals to bring the water’s pH levels up, which makes it taste more like the water sold in bottles. It then gets stored in a metal compartment underneath the solar panel that can hold 30 liters. The reservoir gets connected to a pipe, and sends the water from the device to a faucet.

Zero Mass Water boasts that one Source is able to produce enough clean drinking water each day to satisfy a family of four; however if all four members followed the 8-glasses-per-day rule, that family would wind up about 3 liters short. The panels can be connected, however, to combine their outputs. When that happens, Zero Mass Water programs one to act as the hub, and when that hub uses up the water in its reservoir, it can communicate with the other panels, which act as spokes and sent their water over.

The Source isn’t available for retail sale yet — Friesen says he expects sales to start in early 2017 — so the company hasn’t released a cost estimate for individual units. But Zero Mass Water suggests one device will pay itself off in bottled water savings over two to four years. In other words, each one would be equal to what you’d pay for somewhere between 964 and 1,928 gallons of bottled water at a store like Costco or Walmart. (By our math that would price it somewhere between $1,000 and $4,000 dollars.)

Several countries and organizations have already started putting the devices to use. In August 2015, Jordan’s King Abdullah II installed Zero Mass Water panels in locations throughout the country. Duke Energy has installed panels in schools, homes, and a clinic in Ecuador, and the Zero Mass Water earned a USAID grant to deploy panels to refugee camps in Jordan and Lebanon.

Zero Mass Water’s products seem especially promising for emergency situations, since they are 100% sustainable and don’t require and electrical inputs. Though other companies are also devising ways to extract water vapor from the air — Israeli company Water Gen has a similar technology — many require electricity to run.

Zero Mass Water estimates that because they don’t need to be hooked up to a home’s electrical system or to a power grid, the panels only take about 20 minutes to install. That allows the product to easily brought to places where populations don’t have access to clean drinking water, like rural communities in the developing world or make-shift refugee camps. Source units could also be deployed to help Californians weather the state’s drought, or to provide residents of places with polluted water, like Flint, Michigan, with an alternative source.

“One of the fundamental tenants [of the business] is that drinking water is a human right and everybody should have access to it and control over it and security over it the same way we have those things around air,” Friesen says. “It shouldn’t be something that you have to secure through a government source, through infrastructure, or by purchasing water at the store.”

The Source, of course, is not designed to provide enough water for an entire family’s total daily usage (the average American uses about 100 gallons per day). Rather, it ensures that a moderate supply drinking water is always clean and available — something that’s currently not the case for 10% of the world’s population.

“We are taking an inexhaustible source of water — vapor — and we’re making it free to make it liquid,” Friesen says, adding, “From a technology perspective, of course, we are moving as fast as we can, because this is no joke.”