This ‘Smart’ Juicer Is Like a Keurig Machine for Juice

This ‘Smart’ Juicer Is Like a Keurig Machine for Juice 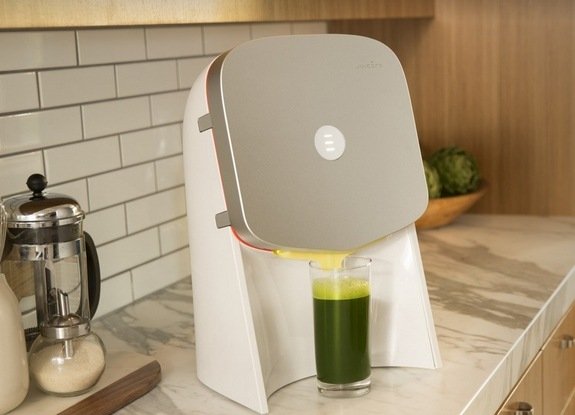 A glass of freshly squeezed juice certainly beats the mass-produced kind you’d buy off a store shelf — after all, it’s both tasty and nutritious. Yet making fresh juice at home has always been a lot of work and a big mess. Now, a company has developed a new high-tech juicer that can deliver fresh, organic juice with the simple push of a button.

The new juice system, made by the company Juicero, operates much like a single-cup coffee brewing system, but for juice. You simply insert a packet of organic fresh fruits and vegetables into a countertop press, and press a button. Within minutes, the machine produces an 8-ounce (237 milliliters) glass of freshly made, cold-pressed juice.

What makes fresh juice better than the bottled stuff in regular grocery stores? Most of the mass-produced juices available to shoppers are made using a centrifuge, which heats the produce as it extracts water and other soluble nutrients away from the fibrous pulp. Heat leads to oxidation, which often affects taste, and some people argue that this process diminishes the nutrition of the juice as well. [9 Healthy Habits You Can Do in 1 Minute (Or Less)]

Fresh juices are more often made with a traditional method, known as the “cold press.” For hundreds of years, people have used what is known as a cloth-and-rack system to force juice from fruits and vegetables. The labor-intensive method uses a rack to generate pressure and a cloth membrane to filter the pulp away from the liquid.

The Juicero system puts a decidedly modern spin on this ancient method. The cloth is replaced with a biodegradable mesh that is wrapped around the produce inside the pack. Instead of a rack, a sleek press — equipped with Wi-Fi and “smart” technology — generates pressure.

It took the company’s research team months to determine the right amount of pressure, said Doug Evans, Juicero’s founder. The researchers found that it generally requires an impressive “4 tons of force or 8,000 lbs. [3,600 kilograms] of pressure,” Evans told Live Science.

But not all fruits and vegetables need the same amount of force to turn into drinkable juice. For example, a watermelon is much easier to juice than spinach, Evans said.

To help the machine figure out the right amount of pressure to use, Juicero equipped the press with a scanner and stamped a quick-response (QR) code — a type of square bar code — on each juice pack. For each code, the press is programmed with an “algorithm that determines what is the best way to press this particular produce in packs, how fast the platens [plates] should move, how long it should go for, how much force to apply — so it is unique,” Evans said.

The QR code also provides information about where the produce comes from and how it was processed. Each code is entirely unique so that the fruits and vegetables can be traced back directly to their source. Additionally, the Wi-Fi-enabled press relays all this information back to a Juicero smartphone app so that customers can track how much juice they drink, when their packs will expire, and when to reorder more organic produce packs, the company said.

It remains to be seen whether Juicero will catch on. While Evans has attracted significant initial funding, the juice machines retail for $699 on the company’s website (but they’re currently available only in California). With packs ranging from $4 to $10 each, the system is considered a luxury item.