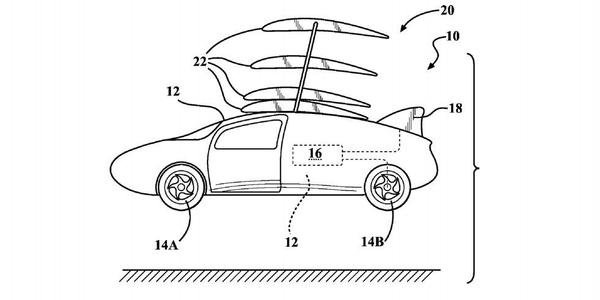 For those wishing they could fly over traffic congestion, you might just get your wish in the not too distant future. Toyota Motor Engineering & Manufacturing North America, Inc., has filed a patent for a stackable wing for an aerocar.

Inventors Umesh N. Gandhi and Robert W. Roe describe in the patent a “vehicle that can be flown as a fixed wing aircraft and driven as a land vehicle.” Toyota filed for the patent on March 2, 2014, and it was published by the United States Patent and Trademark Office on September 3, 2015.

As the above image from the patent application shows, the stackable wings system would fold or retract toward the body of the aerocar until it is deployed. Although the inventors aren’t specific in naming the source of propulsion that would deploy and retract the wings, they mention such options as, a turbofan, pusher propeller, open rotor, or other power sources used in airplanes that can be adapted for an on the road vehicle.

The patent application schematic shows how the wings would collapse into a carrier on top of the car, so they don’t interfere with a driver’s view when not in use. When deployed, the wings would extend upward from the roof. And by being stackable, the wings can vary positions for takeoff, cruising, and landing.

The odds of Toyota moving ahead with its flying car concept are pretty good. Back in June 2014, Toyota official Hiroyoshi Yoshiki said the company’s advanced research and development area was studying the concept of a vehicle that would hover a bit above the road, similar to a hovercraft.

But Toyota isn’t the first car manufacturer to ponder the idea of a flying car. That credit goes to American industrialist and founder of Ford Motor Company Henry Ford. He designed a sky car, which he coined the “sky flivver” that had plane flaps for an upward lift in small spaces and a rear wheel for driving on the road.

After abandoning the project following a fatal crash of a prototype, the auto magnate proclaimed, “Mark my words: a combination airplane and motorcar is coming. You may smile, but it will come.”

Ford’s inkling came to fruition. In 1954, aeronautical engineer and inventor Moulton Taylor developed the Aerocar, a flying car prototype with detachable wings that could fly and drive on roads. However, it required removing the flight system, folding back the wings, and towing the fuselage behind the car.

In 1956, Ford Motor Company took another crack at a flying car, designing a 3/8 scale model of a flying vehicle and naming it the Volante Tri-Athodyne. It used ducted fans to give the car liftoff from the ground.

More recently, a group of graduates from the Massachusetts Institute of Technology (MIT) started testing their own flying car concept. Their company, Terrafugia, is creating two types of flying vehicles. The first, called Transition, is a light aircraft with wings that fold down so it can be driven on the road. The second, called TF-X, looks more like a space-age car and has a fixed wing design for taking off and landing vertically.

Other automakers are exploring flying car concepts, too, including Volkswagen, whose hovercar uses electromagnetic levitation.

Even the Defense Advanced Research Projects Agency (DARPA), the research agency of the U.S. Department of Defense, is looking into the use of flying vehicles, including a hoverbike, to make it easier to get soldiers, gear, and supplies into battle.

But Toyota’s patent brings a mainstream flying car ever closer to reality. So hang in there, takeoff to get away from traffic may not be far behind!