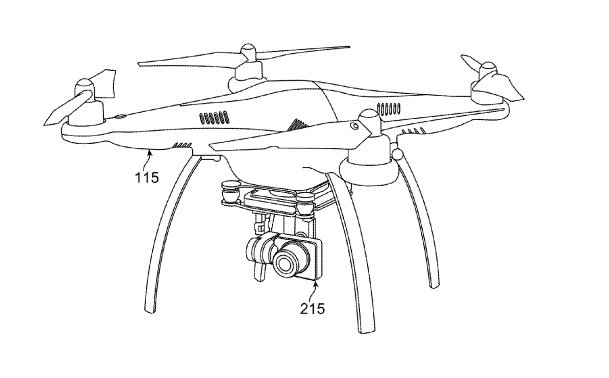 Look, up in the sky! It’s a bird, it’s a plane, no, it’s a Tweet Drone! That’s what Twitter is hoping for in its filing of a patent for a “Messaging-Enabled Unmanned Aerial Vehicle.” The patent application was published by the United States Patent and Trademark Office on December 17, 2015.

Inventors Ya-Ting Wang and Wayne Robins envision the invention as an unmanned aerial vehicle (UAV) with a camera, as shown in the above drawing from the patent application. The drone would receive commands from the controller and receive data from the camera.

The UAV would be connected to Twitter’s messaging platform, so video clips from the drone can be live-streamed, and pictures can be placed in tweets and shared with Twitter users.

But here’s the interesting part – some functionality of the UAV can be triggered through engagements on the messaging platform. That means the drone could be controlled, or more precisely, piloted, by tweets, likes, and replies of Twitter users.

Among the controllable elements of the UAV that Twitter users can pilot are its location, camera subject, camera orientation, and lighting. The inventors suggest that the determination of which Twitter user(s) can control the UAV’s functionality may be through “democratic means.”

In addition to the camera, lighting, a projector, speakers, and a display screen will be mounted on the UAV. Also featured is a detachable payload. The inventors also note that the drone could include a microphone and a display screen for interviews or telepresence functionality.

When the San Francisco-based company was asked by CNBC about its UAV patent filing, a spokesperson for Twitter responded: “Two words: drone selfies.” The company wants people to imagine a day when a drone would take and deliver your selfie to the social networking service.

The drone technology in the patent describes a method for:

The inventors outline a system for achieving these methods of operation that includes: a UAV, a processor, a message authoring engine, and a UAV controller.

Twitter isn’t the only company looking to put drones to work to enhance its service. Amazon, Google, and Walmart are working on drone prototypes as a faster way to deliver online orders to customers.

The huge interest in the commercial use of UAVs has the Federal Aviation Administration (FAA) grappling with how to regulate drones. In February, the FAA proposed allowing drones to fly within the operator’s line of sight and only during daylight hours. The FAA expects to release its completed regulations in mid-2016.

Although the patent application does not mean Twitter will actually build the drone, some technology experts are speculating that the UAV might be used in conjunction with Periscope, the smartphone app for live-streaming of videos and broadcasting of live events that the company acquired in February of this year. Twitter introduced the app in April.