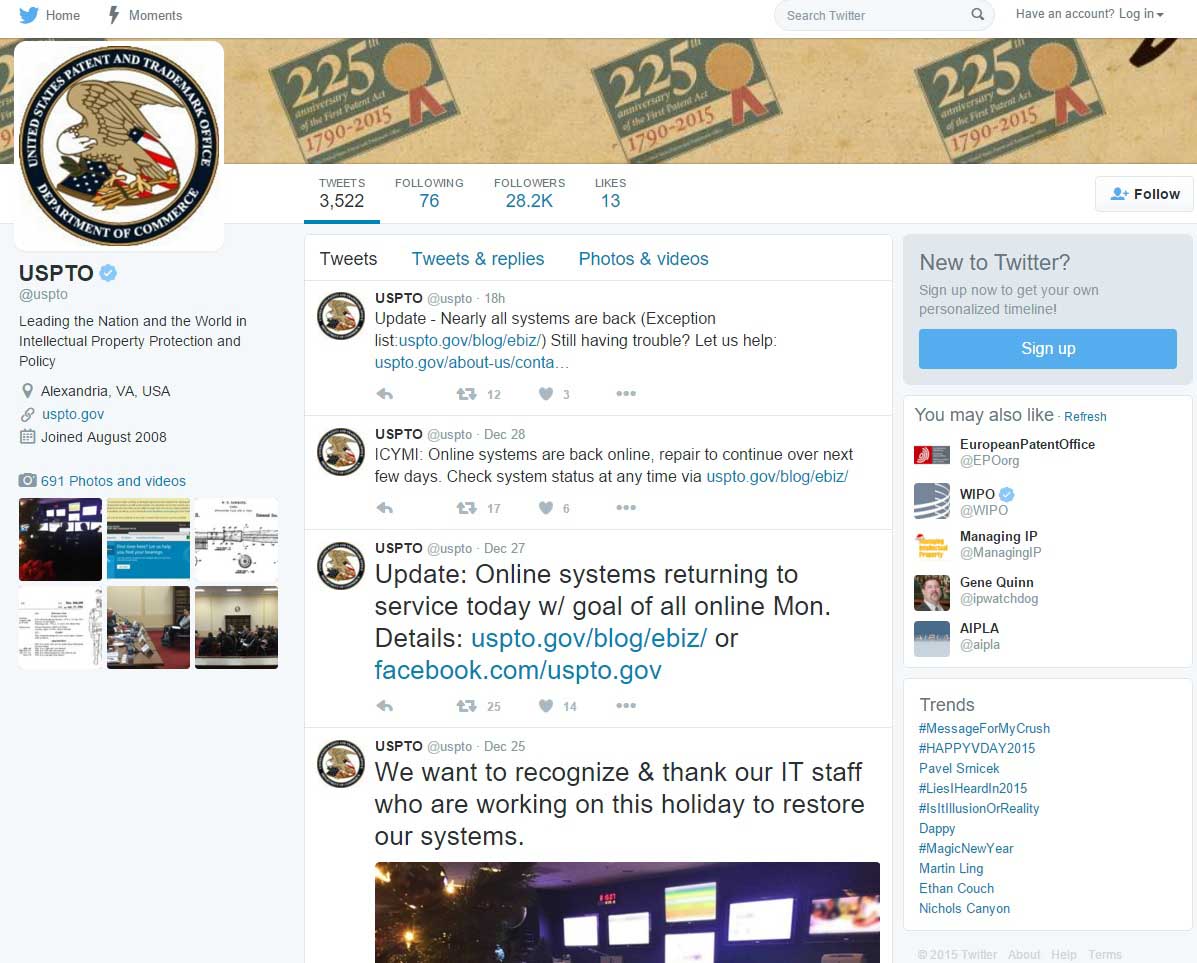 If you had trouble accessing the United States Patent and Trademark Office (USPTO) website the week of December 21, you might want to try again, but expect some IT and online systems to be offline, including the online patent filing system.

A major power outage at the USPTO didn’t make it a very Merry Christmas for its IT staff. They were hard at work like little elves on the holiday trying to get systems back up and running after a December 22, 2015, power outage at the Alexandria, Virginia, headquarters shut them down.

Anyone trying to do a patent search, file a patent, or make a payment knew something was amiss when an error notice appeared saying the page could not be retrieved. For its part, the US patent office posted progress updates on its Twitter account, as shown in the above image, Facebook page, and the USPTO blog.

Since the Tuesday evening outage, teams of USPTO employees, third-party service providers, and contractors have been working around the clock assessing the situation, repairing damaged equipment, restoring power, and stabilizing systems and getting them back online and operational.

Although most systems went back online on Monday, December 28, the latest announcement on the USPTO blog states that: “Even with systems online, there is much work to be done to repair and stabilize power supply and hardware. This work continues around the clock. Therefore, in order to keep systems protected and prevent damage, it is possible that some or all systems may need to be taken offline again.”

A December 24 statement by USPTO Acting Chief Communications Officer Patrick Ross, explains that the power outage caused the shutdown of the USPTO’s public filing, searching, and payment systems, and the core systems used by patent and trademark examiners.

Because it will take time to replace the highly complex power filtration systems, Ross said the USPTO is working with service providers to obtain a source of uninterrupted power to its data center. Uninterrupted power is necessary to prevent damaging surges and drops in power supply.

Unfortunately, the outage couldn’t have happened at a worse time for patent applicants hoping to complete their patent filings before the Christmas break. However, the US patent office said it would be flexible with filing deadlines as a result of the problem.

With regards to other actions or fees or responses that were due from Tuesday, December 22, through Thursday, December 24, the agency declared those days a federal holiday within the District of Columbia. As such, any faxes or electronic transactions that could not be received by the USPTO during the shutdown would be considered on time and applied on the next business day in which the USPTO is open and operational.

Since the public and private patent application information retrieval (PAIR) system is also impacted, users are asked to contact the Patents Electronic Business Center (PEBC) with any questions or concerns. Contact by telephone at 1-866-217-9197 or by e-mail at ebc@uspto.gov during the hours of 6 a.m. to midnight, Monday through Friday.

The USPTO encourages visitors to its website to check its system status web page often for the latest updates.