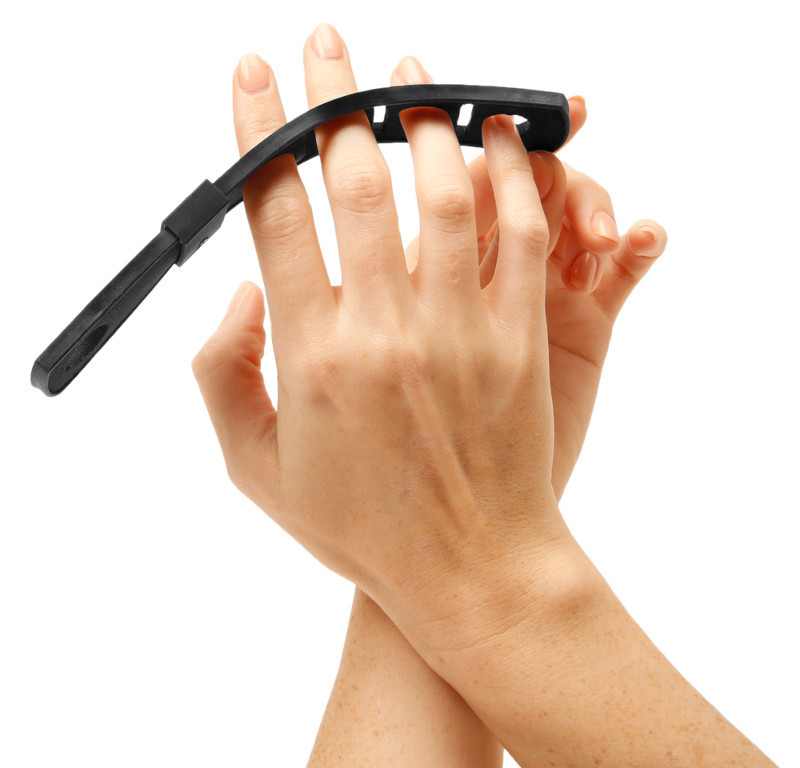 A new one-handed wearable device aims to do away with having to tap your phone, tablet or keyboard whenever you want to type.

That’s the concept behind the Tap Strap, a strip of fabric that fits over your fingers like a glove, with invisible sensors that translate finger gestures into letters and numbers.

Android Headlines jokingly describes the design of the product as “more like a toe separator for nail polish rather than a smart input device.”

According to Phone Arena, here’s how the latest invention by Tap Systems works: single taps from each of your five fingers are converted into vowels, while combined taps make consonants. There are 31 possible finger taps, and while the process has a 99 percent accuracy, users can expect auto-complete and word prediction functionality.

The Tap Strap is Bluetooth-capable, which means it should work with just about any mobile device.

The technology also offers users who are blind or visually impaired with a way to communicate on mobile devices with the speed and convenience of sighted users.

“Tap has the potential to become the communication mode of the future, providing fast, accurate interfacing in situations where no physical keyboard exists,” David Schick, the creator of Tap, said in a statement. “Tap is more discreet and accurate then [sic] voice input, and is faster and more precise than gesture-based systems.”

A Tap Development Kit will be available to developers to allow them to use the device’s capabilities on a various applications, including gaming, AR and virtual reality.

“Tap brings an entirely new dimension to how we can interface with the digital world,” Ran Poliakine, co-founder of Tap said. “Tap’s fundamental technology is applicable not only to language, but also to music, gaming and control. It is a new modality that opens up a world of creative possibilities. We are partnering with creative developers and select OEMs to help us unlock its full potential. Our goal is to create an ecosystem in which our partners utilize Tap to deliver new and exciting experiences for our users.”

The Tap Strap is currently in closed beta testing, and is set to go up for sale in late 2016.

Here’s the Tap Strap in action: